My ﻿
﻿for a wonderful 4th of July.
The latest addition for my Wizard of Oz garden.  I purchased this glass shoe planter on Ebay last week.  I may have to buy one more to make a set for Dorothy.
﻿Ann
Posted by Ann at 3:22 PM 8 comments:

Today I'm sharing a blue cross that hangs above my computer where I blog everyday.  My sister Lori gave this to me last year.

Seems so appropriate today for Sally who is in ICU and a dear friends daughter at our church that I have shared about on Spiritual Sunday, Anna (6 yrs) who has brain cancer and is currently in a coma.

We are leaning on the "Everlasting Arms" today.

Thank you Jenna and Ara for keeping us informed about your grandma.  Blessings to all my Blue Monday blogging friends.

Sending pink kisses to all of my Pink Saturday friends today!!!!!

Just a little history on the X's used for kisses. During Medeival ages, a cross was drawn on documents or letters to mean sincerity and honesty.  A KISS was then placed on the upon thre cross by the signer  to display their sworn oath. It has gradually become a symbol for love and people still draw in on their cards and letters.


I have a few different pinks for today.

First my 9 yr. old grand made a pillow for Papaw for him to use in his easy chair. She used the sewing machine and stuffed the pillow with pillow foam.  Very summery and PINK.


Our girls enjoying the beautiful 70 degree weather this past week (very unseasonal).

We are currently working on our new deck and the mild weather has been so wonderful to work in.
I love the way the stem grows on this Clome plant don't you?
HAVE A PINKALICIOUS DAY.
ann
Posted by Ann at 11:02 AM 13 comments:

http://asoutherndaydreamer.blogspot.com/
New blooms in my garden this week.

Front yard hostas in full bloom.
Stonecrop growing out of a crack in a rock from one of my back yard gardens.

Wood was delivered for our new deck today. So excited.

http://howsweetthesound.typepad.com/my_weblog
Having fun this summer (just a few more days until it's officially summer).  Today my granddaughters and daughter and I  had some fun going to a movie.

We took the girls to see "Judy Moody, And The Not Bummer Summer".  SO CUTE.  I bought my grands the  book series this last year and they love Judy--what a character she is.

Judy is a 3rd grader and our girls around the same age.  Judy wears high top tennis shoes and so do we!

If you want a really cute movie for your kids or grandkids you must go see it.
Hope all is fun around your neck of the woods!!!!!! 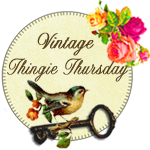 Showing my purchases from a wonderful garage sale last weekend.  The homeowner was a vintage collector like me and was cleaning out!!! 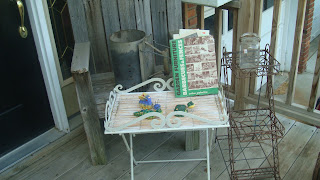 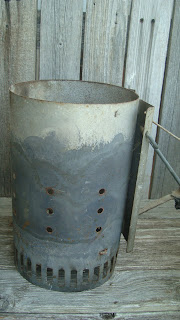 Using this to plant annuals
The woodworking book had so many neat projects: 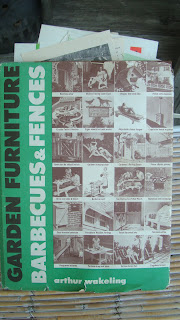 The owner also had clipped newspaper articles on projects from the 50's and 60's and they were still in the book. 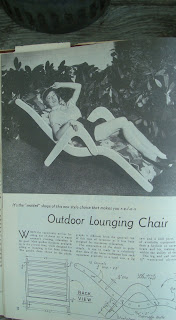 The metal table also has a bamboo top-will be great on my new deck.
Happy hunting.
Ann
Posted by Ann at 8:28 AM 4 comments:

http://asoutherndaydreamer.blogspot.com/
We are doing major work to our back yard.  We are putting on an L-shape deck across the back of the house--going from the sunroom.  We are using Trex-lumber---I'm so excited.

So part of the gardens are not getting the attention they deserve this spring.  My hubby has been laying pipe to all of my gardens and putting in faucets in each garden so I don't have to drag a hose around the yard.

My tomatoes however are doing good this year, I have three kinds planted. 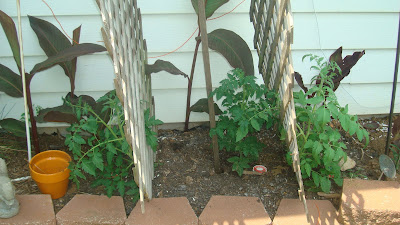 We don't usually get tomatoes here in Kansas until about Aug. 15th.  I can hardly wait so I can make BLT's.

I purchased this metal plant stand at a garage sale last week for $5.00.  Holds  mint, sweet basil and some marigolds. 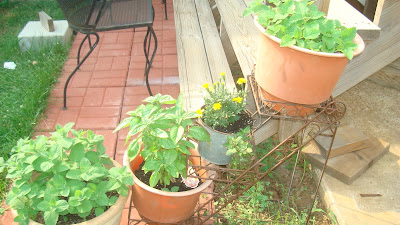 The foundation posts are showing for the new deck.  After it is on, I will be doing major landscaping.

Hope you are enjoying your spring and it's not too hot where you live.

"THE CHURCH IN THE WILDWOOD"

We were sitting outside yesterday drinking coffee and I was looking at the gardens in my yard.  In one spot I have cannas and chives and a redwood bush growing in one area.  In the middle of it I have a white CHURCH bird house.   This song came to my mind and I've been humming it for two days: 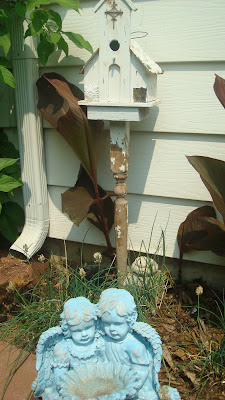 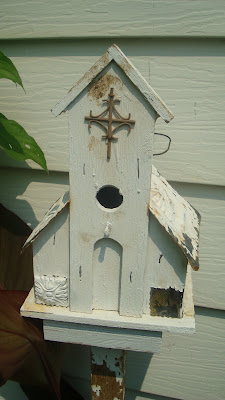 "THE CHURCH IN THE WILDWOOD'

There's a church in the valley by the wildwood,

No lovelier spot in the dale;

No place is so dear to my childhood

As the little brown church in the vale.


William Pitts was on his way to visit his bride-to-be in Fredericksburg, Iowa. The stagecoach in which he rode stopped at Bradford, 14 miles west of Fredricksburg. There he strolled about enjoying the trees, the lush green growth and the gentle rolling hills as he anticipated the joy of seeing his beloved.

Of particular beauty was a wooded area in the valley formed by the Cedar River. Pitts envisioned a church building there and could not seem to ease the vision from his mind. Days later, when he returned home, he wrote a poem about the imagined church and set it to music in 1857.

Pitts returned to Bradford Academy to teach music seven years later. To his surprise he discovered a small church building being erected on the very spot where he had imagined a church years before. It was painted brown because that was the color of the cheapest paint to be had.

Pitts located the copy of his almost forgotten song, and, at the dedication of the new church building, his singing class from the academy sang it for the first time.

In 1865, Pitts sold the song to a Chicago music publisher for $25. He used the money to enroll in Rush Medical College, but his song was forgotten. After graduation in 1868, Pitts returned to Fredericksburg where he practiced medicine until his retirement in 1906.

By the turn of the century, the village of Bradford had almost ceased to exist. It had been bypassed by the railroad that went through Nashua, two miles to the west. Weeds grew in the churchyard, and the dilapidated building was closed.

A few years later the congregation experienced revival, the church was opened and re-painted its original color. Traveling musicians discovered Pitts's song, and its popularity spread through the country.

The Little Brown Church in the Vale has become a famous tourist attraction in Iowa, and the song describing its beauty is still sung. Standing in a picturesque rural setting among pine trees, the church is a favored place for weddings.

Each year several hundred couples, young and old, are married there. Following the ceremony, each bride and groom together pull the rope that rings the church bell.

Even though I live in the city, I'm a country girl at heart.

Happy Outdoor Wednesday
Ann
Posted by Ann at 9:17 AM 11 comments:

Last week my niece brought her three little ones to play with my grands, they  had so much fun in our back yard. 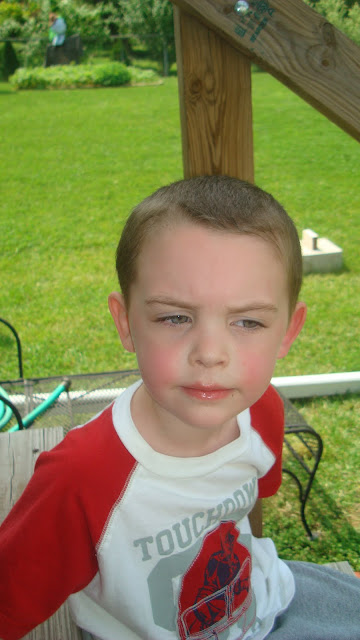 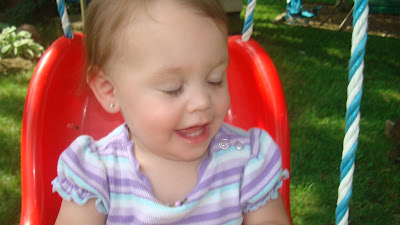 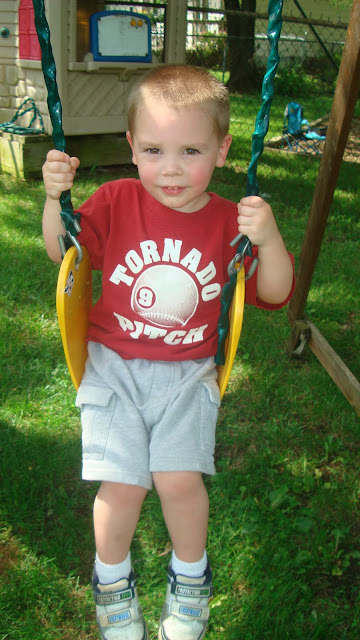 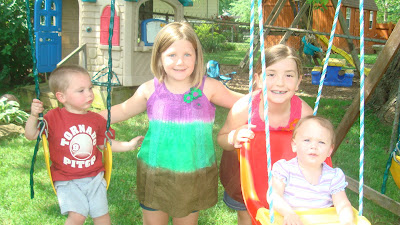 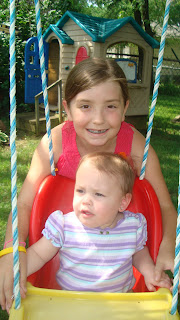 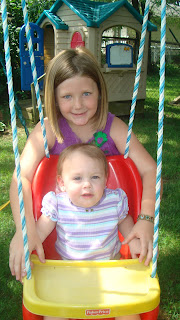 My grands will make the best babysitters!!!!   I know the BLUE dosen't knock you out----but there is blue in there.

Have a wonderful week where ever you are !!!!!

Sunday Stamps - Anything you wish

One of my favorite subjects are flowers so that what Im' featuring today. 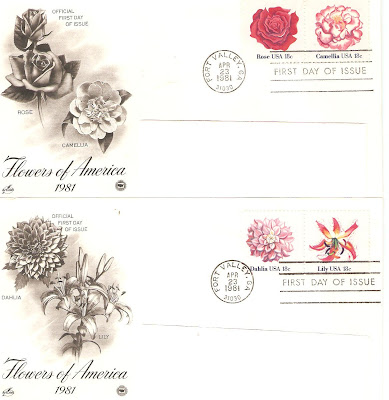 The stamps that were featured in 1981 are the Rose, Camellia, Dahlia and Lily.

These four stamps featured  flowers which add beauty and brightness to America's gardens.  The block was designed by Lowell Nesbitt of New York City.

The Rose is the worlds most popular garden flower and is the state flower of New York.

Gardening offers endless possibilites for self-expression and creativity.  Since gardens are alive they  are constantly changing and responsive to care.  We as gardeners are taught patience and reverence for nature.  In North America alone there are over 30,000 species of blossoming plants.

I have roses and lillies growing in my gardens.

Have a wonderful week smelling all of those delicious fragrances.

http://howsweetthesound.typepad.com/my_weblog
After a fantastic 3rd birthday party last Saturday, here we are carrying on a rich pink saturday tradition.

Some of my perininals have bloomed this weekend: 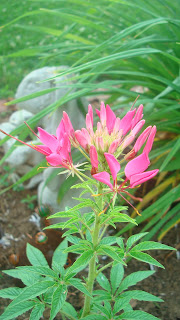 A new Clome I planted a few weeks ago.  I really love how delicate this plant is, beautiful foliage and pretty pink. 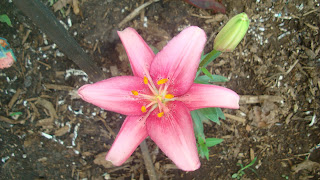 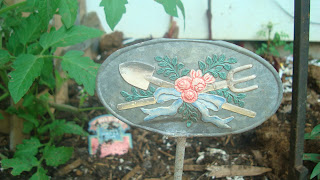 Off to market to buy Miracle Grow plant food (the kind that attaches to your garden hose) LOVE IT.